Through a COVID-19 6th Grade lens on life 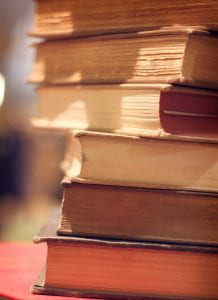 Have you had trouble deciding what you want to read during COVID? Well, I have some amazing book titles having to do with romance, mystery, realistic fiction, and more.

One of my favorite books that I’ve read is The Selection by Kiera Cass. It’s a series of three books. Here is the description of the first book.

When America Singer gets chosen for the Selection, she has no feelings whatsoever for Maxon Schreave, the crowned prince of the new country Illea. She wants no romantics with him, and has agreed to become friends, With no affectionate moves applied. As the contest goes on, America finds herself with new friends, new enemies, and a lasting feeling for another back home. What will happen to America? Will she get over the feeling for the person back in her province? Will she enhance the possibility of finding feasible affection for the prince, even though she had previously decided not to? Or will she be confused and upset forever? Read The Selection to find out!

The next book is a spy/realistic fiction themed book called City Spies. It’s by James Ponti. Here is the description:

Working out of a castle in Scotland, the City Spies are a group of five kids who have slipped through the cracks only to form an unbreakable bond. When they’re not at the local boarding school, they’re handling CIA and FBI level explosives, breaking and entering, and more. When a bad guy comes to them, it’s up to the City Spies to stop it. Will they? Or will the villain get away with his crimes?

Here’s one that is realistic fiction/historical fiction. It’s one of my most favorites that I’ve read. It’s called Echo Mountain by Lauren Wolk.

When the Great Depression takes almost everything they own, Ellie’s family is forced to leave their home in town and start over in the untamed forests of nearby Echo Mountain. Ellie has found a welcome freedom, and a love of the natural world, in her new life on the mountain. She meets new people, such as a hag name Cate and a boy who could make a knife sing.

And here’s one more. If you like way back history with hilarious touches of comedy, you’ll like Percy Jackson’s Greek Gods by Rick Riordan.

Thanks for reading this blog post about books to read during COVID-19. 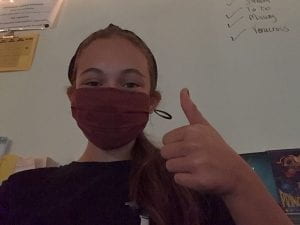 This is me on a school day wearing my mask, sitting at my desk.

This year hasn’t been a normal year. Everyone can relate to that simple statement. But as the world rebounds in the way that we always do, Durham Academy Middle School has gone back to school.

We’re on a staggered schedule, last names A-L on Mondays and Wednesdays and M-Z On Tuesdays and Thursdays. On days where we’re not at school, we’re virtual, learning through apps like Google Classroom and Microsoft Teams.

Other things in my life have gone from nonexistent to existent. For instance, my soccer team, 2009 Barcelona (Triangle United) have started doing contact soccer. I have played in one game as of right now, and I have more to look forward to. My first game was in Wilmington. When I stepped out of the car, I could smell the salt we were so close to the ocean!

Covid-19 has provided me with more opportunities than not, if you can believe it. I got to spend more time with my family, which is always fun and interesting. Normally we all have activities every day of the week, and so it was nice to be able to spend time with them.

As the whole world works through COVID, I know that we will pull through. We have faced things like this before, and we have gotten through those stronger than ever. This will only make us stronger, believe it or not.

But right now, if wearing masks and staying six feet away is what we need to do to stay safe, I encourage everyone to do those things! This will not just go away on it’s own. We have to take the necessary precautions to help this virus to go away. I know we can do it.